Magnification of a Microlensing Event

Previously, we have concluded that current telescopes cannot resolve the two images formed during a PSPL event. Notice how there is no wavelength dependence in the lensing equation - microlensing affects all frequencies of light equally, unlike most forms of intrinsic stellar variability. So what can we observe? Here we examine the effect on the intensity of the light reaching the observer.

Derivation of the Magnification Equation

Look at Figure 3 and imagine a bundle of light rays leaving the source, only to be deflected from their paths by the lensing mass into two images. We can describe the appearance of these images as if projected onto two planes - one at the level of the observer, P' and one at the distance of the lens, P. 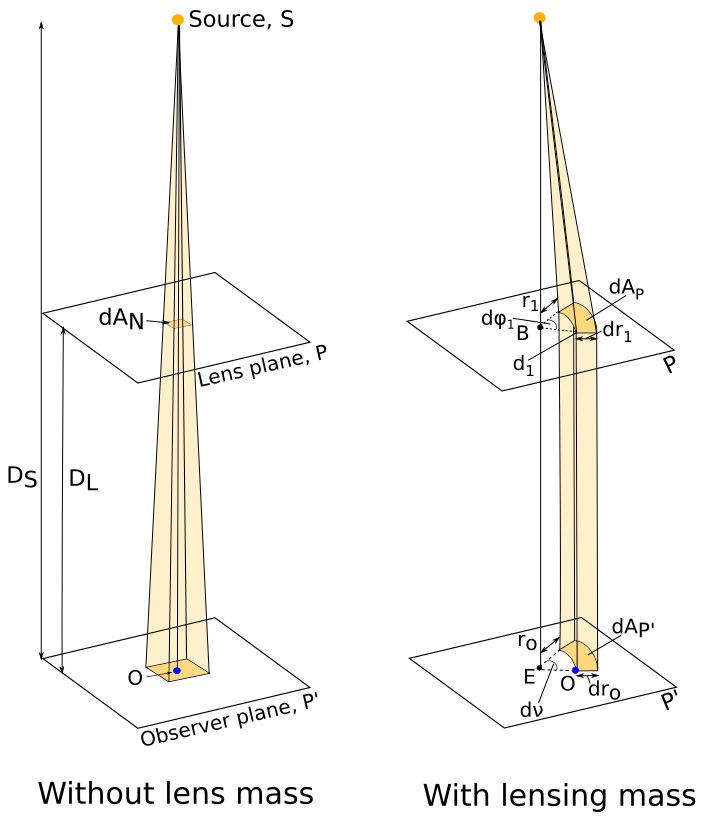 Based on Fig 2 from Refsdal (1964) (R.A.Street)
The lens changes the course of the light rays but also cross-section of the bundle. However, the specific intensity, I, remains constant; the surface brightness of the image is identical to that of the source, unlensed. So, flux of an image = surface brightness x solid angle subtended on sky. Therefore, the magnification, A, during an event is the ratio of the flux of the image to the flux of the unlensed source, which is equivalent to the ratio of the solid angles subtended on the sky by the lensed image, ΔΩ relative to the unlensed source, (ΔΩ)0:

The relationship between ΔΩ and (ΔΩ)0, the distortion of the image area, is described by the lens equation: