The distances between stars are so vast that even our nearest stellar neighbors appear as unresolved points of light. This hasn't stopped astronomers figuring out an array of inventive techniques to find out more about them, but it remains a challenge to study in detail all but the closest objects. Yet thanks to the curious effects of gravity on light itself, there exists a kind of natural telescope which can magnify distant stars. This phenomenon can teach us a lot, not just about those stars but about the 'telescope' as well. The is known as gravitational lensing. When both the lensing object and its distant source are stars or planets, it's called microlensing. It has the extraordinary property that it can tell us about objects that we would otherwise never know existed. In most cases, the lens - which could be a faint star half way to the center of the galaxy - is entirely invisible. Yet this technique can find and characterize planets around that object. These notes describe microlensing's fundamental principles, from the perspective of an observer on Earth. The movements of stars through the galaxy means that the stars we see are never fixed, and sooner or later the path of one star will carry it across the observer's line of sight to a background star. The gravity of the foreground star modifies the paths of the light rays from the background source star, causing them to be focused. For this reason, the foreground object is called the lens. In the simplest case of microlensing, both objects are treated as point masses, and so this is called a 'point source, point lens' event. Of course, the stars don't remain in alignment for long, so microlenses are transient events, which offer a fleeting glimpse of an unseen intervening system, never to be repeated.

Figure 1: The geometry of a microlensing event. The red lines indicate the paths taken by light rays from the source.

The closer the light rays get to the lens, the more they are deflected, according to Einstein's equation:

Like any lens, the foreground object creates images of the light source. Consider a light ray leaving the source. It's path is deflected and it reaches the observer, who sees a corresponding image of the source, at an angular separation from the source's true position on the sky.

We will assume that the distances involved are sufficiently large that standard geometric small angle approximations are valid.

From Fig. 1, we observe the following relationships:

Combining these observations, we can derive an expression for the angular displacement of the image in terms of the G.R. deflection of light:

By substituting [7] into [6], we derive the gravitational lens equation:

Notice how all of the constants are clustered in the last term on the left of eqn. [8]. This term depends on fundamental constants plus the characteristics of the lensing system - ML, DL. So this term describes a characteristic angular radius of the system: it is the angular Einstein radius, θ0:

The lens equation can then be written as a quadratic function:

...and quadratic functions can be solved to find two roots using the standard mathematical formula:

where A, B, C are the coefficients of the quadratic equation, in this case A=1, B=-α, C=-θ02. So we solve the lens equation:

From this, we understand that the observer always see two images of the source created during a lensing event by a single, point lensing body and can predict their positions. The only exception to this occurs if the alignment of the lens along the line of sight to the source is perfect = that is, α = 0. From Eqn. 10, we see that both images then have the same angular separation. In this special case, the image of the source that the observer sees is a perfect ring at the Einstein radius. In all other cases, the images form arcs.

We now shift our perspective, and consider the same lensing event from the observer's point of view, shown in Fig. 2. In this lens-centric geometry, we define: 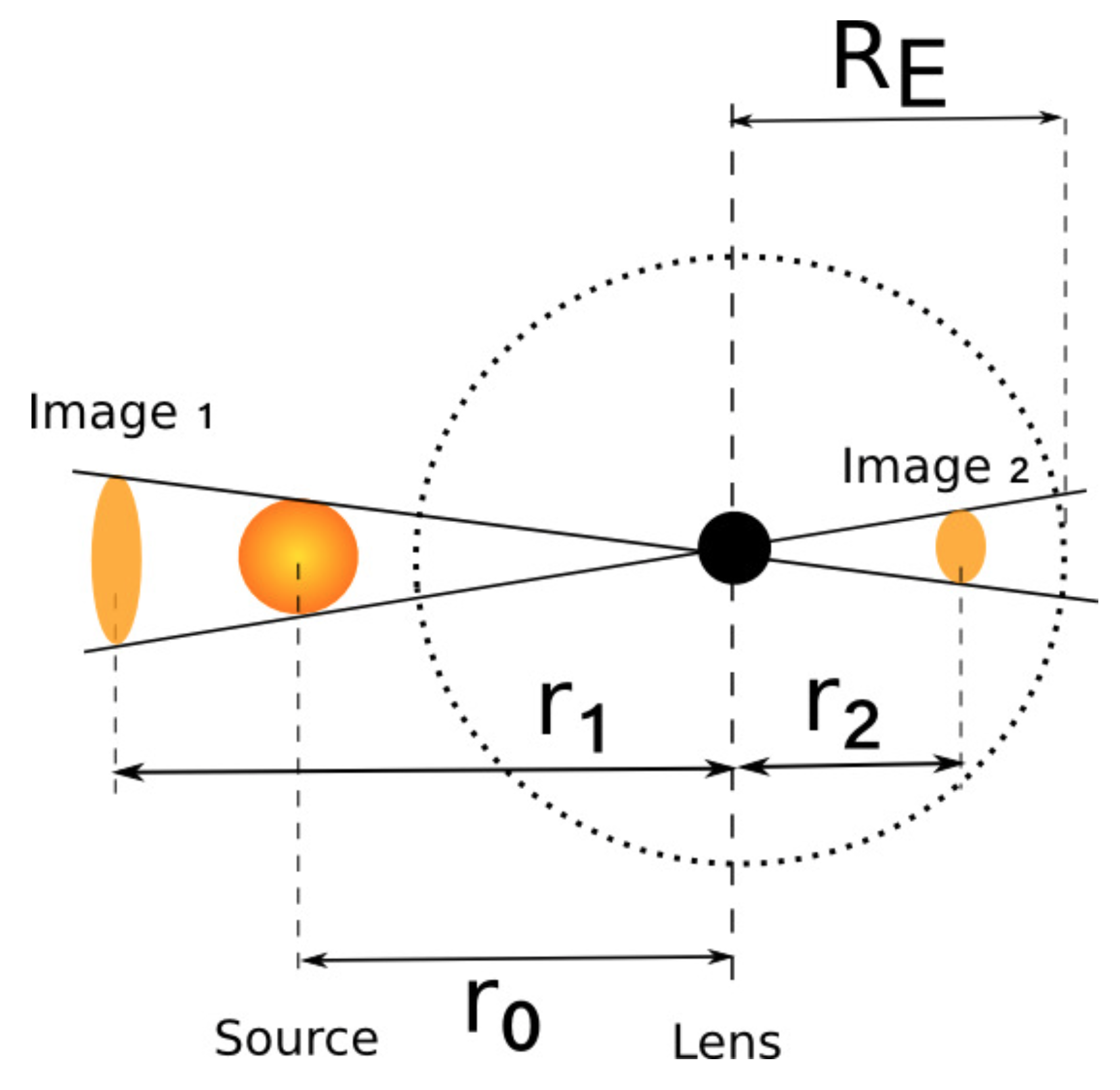 The geometry of a microlensing event, seen from the observer's perspective. Here we look down the line of sight, with a coordinate system centered on the lens for convenience. Notice that the images of the source always form with one inside and one outside the Einstein radius of the lens.

We can re-write the lens equation and its solutions in terms of radial distances from the lens projected on sky:

where, to use the commonly-used notation of Paczyński (1986) and others,

The solutions of this, i.e. the projected locations of the images, are then: